Home » Blog » Hadoop Tutorial: All you need to know about Hadoop – NareshIT 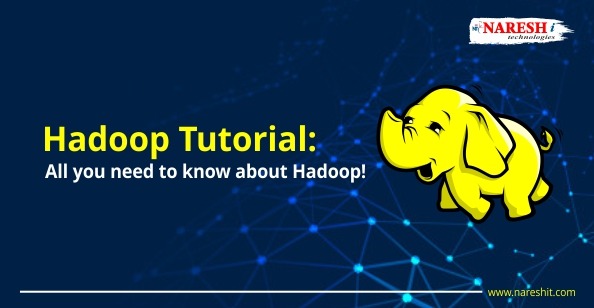 Hadoop is the open source platform which is very much trendy now a days. Every corporates are looking for good Hadoop developer.

The Hadoop was first introduced by Mike Cafarella and Doug Cutting  who are the persons trying to create a search engine system that can index 1 billion pages. So they are going to start their research to build that search engine but they found that the cost for preparing such engine will be very high. So, They came across a paper, published in 2003, that described the architecture of Google’s distributed file system, called GFS. Later on in 2004, Google published one more paper that introduced MapReduce to the world. Finally, these two papers led to the foundation of the framework called “Hadoop“.

How It All Started?

As I have already discussed above the foundation of Hadoop and its relevancy in terms of processing the search data. Here the term GFS is something which is mainly used to solve all search strategy for storing very large files that are generated as a part of the web crawl and indexing process in any case.
It also uses the Map Reduce technique which is mainly used to map the large data files and help for better search strategy. It is being considered as the major part framework called “Hadoop“.
So, by considering it the Hadoop is became so powerful.

What is Big Data?

As we have discussed above that the Hadoop is an open source. It is mainly a Java based framework used for storing and processing big data. The data is stored on inexpensive commodity servers that run as clusters. Cafarella, Hadoop uses the MapReduce programming model for faster storage and retrieval of data from its nodes.

Big data is a collection of large datasets that cannot be processed using traditional computing techniques. It is not a single technique or a tool, rather it has become a complete subject, which involves various tools, techniques and frameworks.

Here the Big data is mainly used to involves the data produced by different devices and applications. Some of the fields that come under the umbrella of Big Data are discussed as below.

Here now Let us take an analogy of a restaurant to understand the problems that is associated with Big Data. Here we will try to learn that how Hadoop solved that problem.

Let us consider that the Bob is a businessman who has opened a small restaurant. Initially, in his restaurant, he used to receive two orders per hour and he had one chef with one food shelf in his restaurant which was sufficient enough to handle all the orders.

Now let us compare the restaurant example with the traditional scenario where data was getting generated at a steady rate and our traditional systems like RDBMS is capable enough to handle it, just like Bob’s chef.

As we have already discussed earlier that the Hadoop is an open-source software framework like Java script and is mainly used for storing and processing Big Data in a distributed manner on large clusters of commodity hardware. Hadoop is licensed under the Apache v2 license.

Hadoop was developed, based on the paper written by Google on the MapReduce system and it applies concepts of functional programming. Hadoop is written in the Java programming language and ranks among the highest-level Apache projects. Hadoop was developed by Doug Cutting and Michael J. Cafarella.

Let’s understand how Hadoop provides a solution to the Big Data problems that we have discussed so far.

The major challenges associated with big data are as follows −

How to store huge amount of data:

How to store a variety of data:

How to process the data faster:

So, what does it mean by moving the computation unit to data?

It means that instead of moving data from different nodes to a single master node for processing, the processing logic is sent to the nodes where data is stored so as that each node can process a part of data in parallel. Finally, all of the intermediary output produced by each node is merged together and the final response is sent back to the client.

The Hadoop is having the following features which makes it more unique than others. Such as

Hadoop infrastructure has been designed in such a unique way so that it has inbuilt fault tolerance features. So that even the failure took place it has a back up strategy to handle the situation. hence, Hadoop is highly reliable.

Hadoop uses commodity hardware (like your PC, laptop). We can easily run it on any environment.

For example, in a small Hadoop cluster, all your DataNodes can have normal configurations like 8-16 GB RAM with 5-10 TB hard disk and Xeon processors.

Also It is easier to maintain a Hadoop environment and is economical as well. Also, Hadoop is open-source software and hence there is no licensing cost.

Hadoop has the inbuilt capability of integrating seamlessly with cloud-based services. So, if you are installing Hadoop on a cloud, you don’t need to worry about the scalability factor.

Hadoop is very flexible in terms of the ability to deal with all kinds of data. The Hadoop can store and process all kind of data, whether it is structured, semi-structured or unstructured data.

While setting up a Hadoop cluster, you have an option of choosing a lot of services as part of your
Hadoop platform, but there are two services which are always mandatory for setting up Hadoop.

Let us go ahead with HDFS first. The main components of HDFS are the NameNode and the DataNode. Let us talk about the roles of these two components in detail.

HDFS follows the master-slave architecture and it has the following elements.

The YARN of Hadoop is basically contains two major components, such as,

The Hadoop is a platform or framework which solves Big Data problems. Here it acts as a suite which encompasses a number of services for ingesting, storing and analyzing huge data sets along with tools for configuration management.

Huge datasets − HDFS should have hundreds of nodes per cluster to manage the applications having huge datasets.

Hardware at data − A requested task can be done efficiently, when the computation takes place near the data. Especially where huge datasets are involved, it reduces the network traffic and increases the throughput.

Achieving your dream goal is our motto. Our excellent team is working restlessly for our students to click their target. So, believe on us and our advice, and we assured you about your sure success.